Our cylinders not only provide energy to industrial and agricultural facilities, public institutions, hotels, restaurants and catering units but are also equally suitable in the home for baking, cooking and heating.

We have depots situated in Durban, Harrismith, Ladysmith, Newcastle and Greytown.

Where does LPG come from?

LPG has 2 main origins. Around 60% of the gas comes from the extraction of natural gas and oil from the earth. The other 40% is produced through the refining of crude oil. Traditionally, LPG was wasted and burnt off as an unwanted by-product of the production of other fuel sources. But, now it’s recognised as a versatile low-carbon fuel that can provide an exceptional amount of energy.

LPGs are produced at various stages of refinement, such as atmospheric distillation, reforming and cracking. LPG accounts for only 1-4% of crude oil processed, dependent on the type of crude oil, the oil refinery and the market values of LPG.

After the oil and gas production rigs process the gas, the LPG is transported from the production site to large storage terminals, where it is kept at the ideal temperature.

Once in the cylindric tanks, LPG can be transported anywhere it is needed. Typically, it will be bought by retailers and fuel suppliers and sold to individual customers. The LPG can then easily be used to fuel cars, trucks and even lorry fleets, offering a more sustainable and cheaper fuel alternative.

Greytown Gas was acquired in August, 2018. And Mr. Ravi Kistnasamy was appointed as the General Manager. Ravi boasts 15 years of experience in the industry.

The purpose of acquisition is to build on the company vision to be the energy provider of choice.

The strategy is to utilize synergies across the business units and to maximise share of wallet.

LPG is delivered from the refinery & transferred to the bulk storage tanks at the depot.

The delivery tank & the depot storage tanks must be soundly earthed before transferring the LPG.

Cylinders are checked for defects. Cylinders are washed and cleaned. Once filled, cylinder nozzles are completely sealed.

Cylinders are filled using carefully calibrated machines. The time taken to fill a cylinder is less than a minute.

Each cylinder has a unique tracking number, to verify it has been completely filled. In South Africa LPG is a 60:40 mix of Propane and Butane.

Propane has a lower boiling point and so is preferred in climates that go below zero.

Cylinders are loaded daily for delivery.

Some loads are up to 5 tonnes so we require a 12 tonne truck. 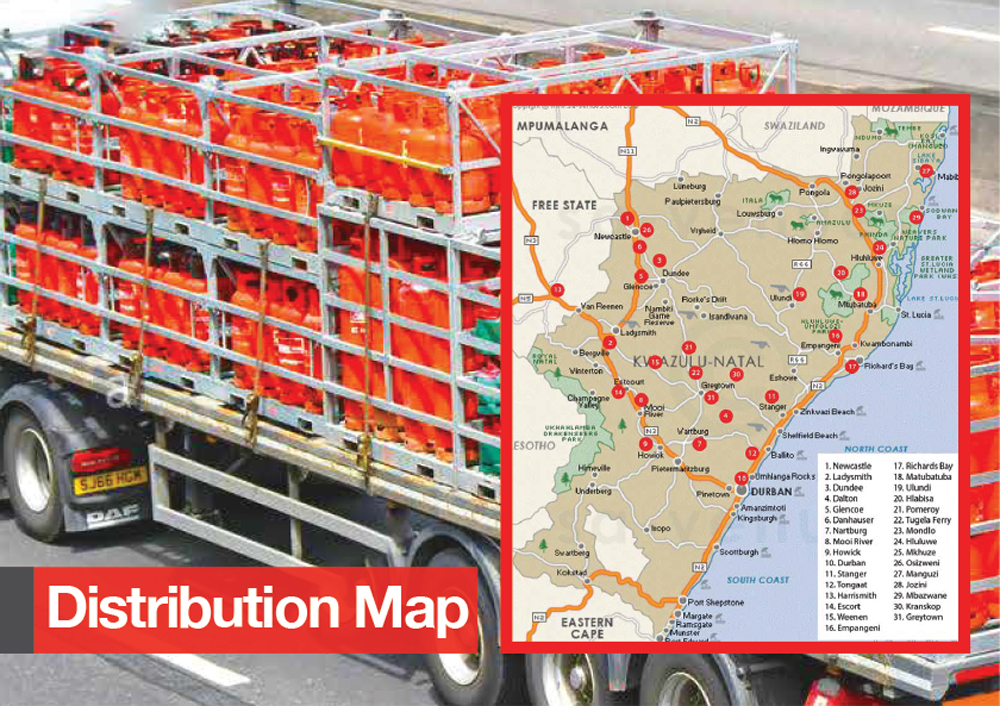 Keep up with our latest projects and product oﬀerings.